The Anne Frank Center offers a wealth of stimulating outreach programs to schools, teachers, and students. Our live performance programs are an excellent way to bring Anne’s story to life in your community, facilitate dialogue about injustice, and spark ideas to confront intolerance and discrimination today.

AFC performances have reached thousands through K-12 schools, colleges, religious institutions, community centers, and educational conferences. Our talented actors have also performed in communities hosting our traveling exhibits, such as the Clinton Presidential Center, the Dallas Holocaust Museum, and many other venues across the country. 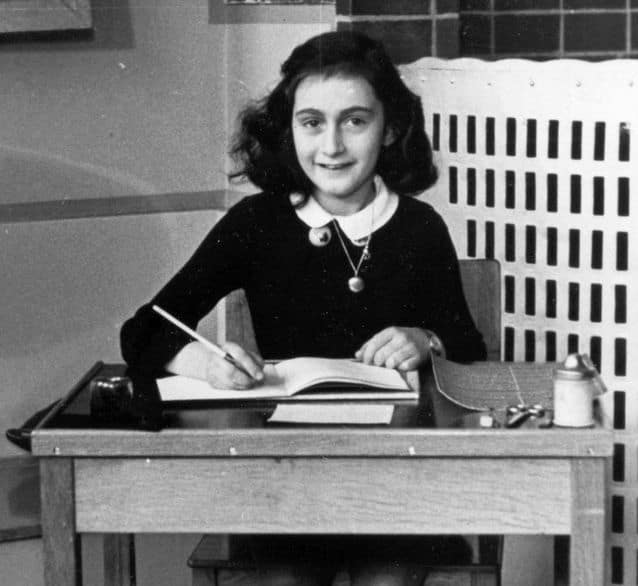 Conversations with Anne is our signature one-act solo show, inspired directly from Anne’s diary. Ideal for student and family audiences, the program provides a uniquely personal glimpse into Anne’s time in hiding. After the performance, the actor playing Anne answers questions from the audience in character, giving children a chance to connect the present with the past, by imagining they are having a conversation with Anne Frank herself. 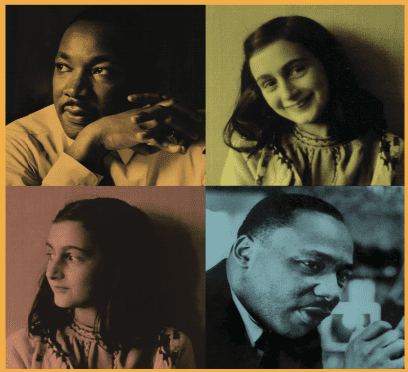 "Letters from Anne and Martin"

Letters from Anne and Martin is a unique production that combines the iconic voices of Anne Frank and Martin Luther King, Jr., both of whom were born in 1929 yet seemingly represent drastically different times and cultures. Developed from excerpts from Anne Frank: The Diary of a Young Girl and Dr. King’s “Letter from a Birmingham Jail,” this piece evokes the important messages from these legendary figures, as they write of their hopes and plans for a peaceful and unified world. This is currently our most-requested program, as it touches both students and adults of various backgrounds and demonstrates the universality of the human experience. 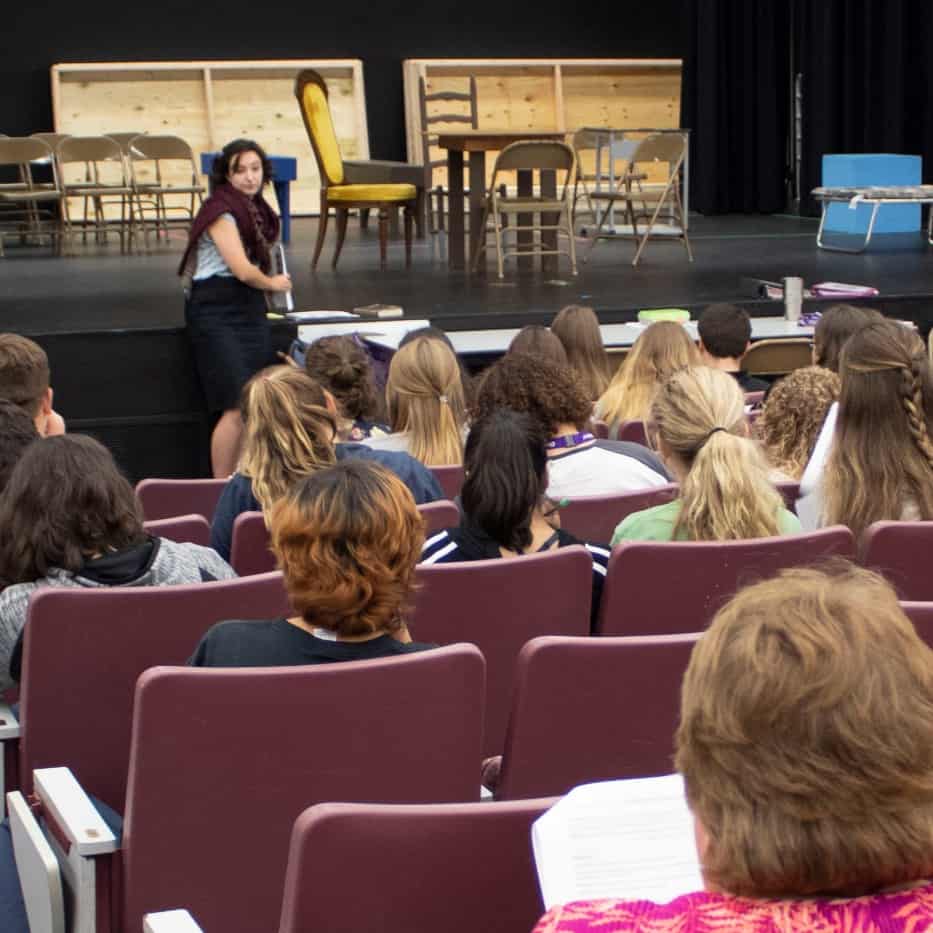 The most popular stage adaptation of The Diary of a Young Girl has told the story of Anne Frank to audiences young and old for over 60 years. Today it remains a staple for theatre companies that wish to show the world the lasting relevance of her story. In our AFC Cast Workshops, actors and production team members putting on The Diary of Anne Frank in their local communities will learn about:

Through an informative session in a discussion setting, actors and production members will grow in their understanding of the world of the play (the political, economical and cultural climate) as well as the stories of the real people hidden away in the Annex and those who helped them. They will have information and details about the environment and lives of the characters that may not be apparent in the script but can enrich the production and bring it to life for audiences. Workshops available for 60 to 120 mins.

Our professional, New York City-based actors bring to life the words of Anne Frank and Dr. Martin Luther King, Jr., in our two signature shows: Conversations with Anne and Letters from Anne and Martin. Both performances are followed by talk-backs with the actors. Learn more about our performance programs here, and consider bringing one to your school or community! 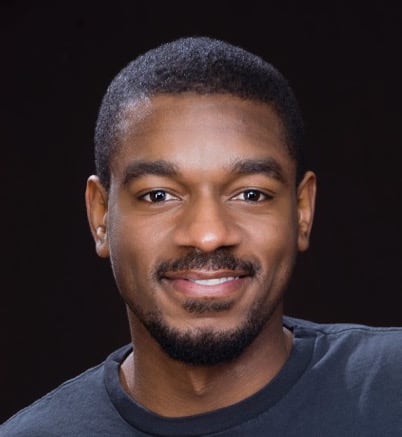 Parish Bradley (Dr. Martin Luther King, Jr.) is an American actor from Buffalo, New York. He studied acting at both Stella Adler school of acting as well as The Bova Actors Workshop. He is currently an Artistic Associate with the professional theatre group “The Seeing Place.” His most recent film work is a short film called “See You Yesterday,” with executive producer Spike Lee and screened in over 30 National and International Film Festivals in 2017.  To learn more about Parish Bradley visit his website: parishbradley.com 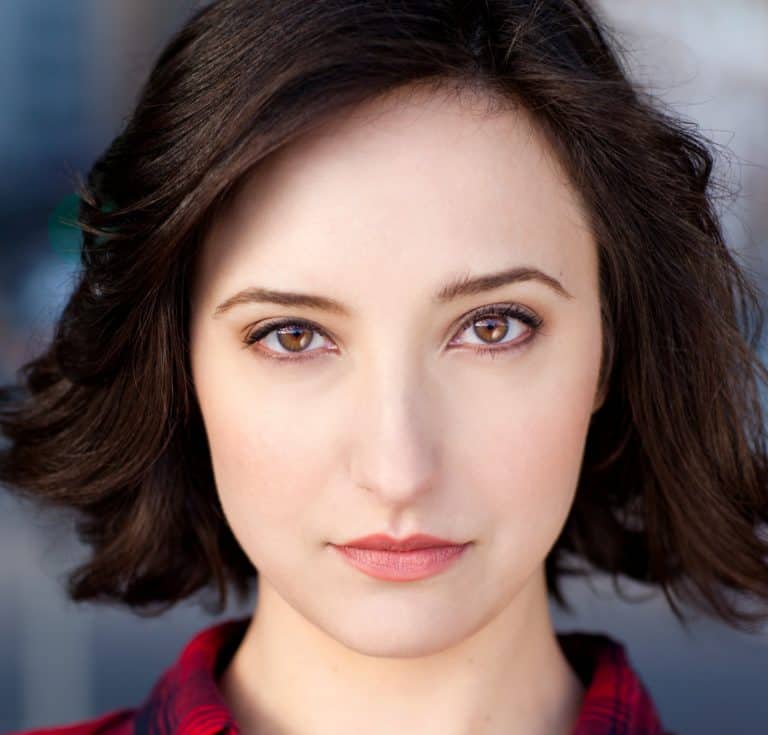 Alexandra Gellner (Anne Frank) is an actor, collaborator, and teaching artist who hails from Northern California and is now based in Brooklyn. She received her MFA in Acting from The New School for Drama. Ever since Alexandra first read Anne Frank’s diary at a young age, she has endeavored to spread the practice and importance of empathy through theatre and film. She is delighted and humbled to now be working alongside the team at the Anne Frank Center for Mutual Respect to carry out our mission and to honor Anne’s legacy. New York City credits include As You Like It, Romeo & Juliet (The Cradle Theatre Company); Pericles (The New Ensemble Workshop); Pants & Skirts (The Barrow Group); Coffee & Biscuit (HERE Arts SubletSeries, NYC Fringe); Family Business (HB Studios); Hamlet, Chained Woman, The Spider & The Wasp, The Trojan Women, Execution of Justice (The New School for Drama). Other credits: Same Time Next Year, Wait Until Dark, Crimes of the Heart (Ferndale Rep); Oleanna (Article 19: Birmingham, UK). Film: Adherence (Best Actress in a Short- FirstGlance Film Festival Philadelphia), Turnings, Turncoat, Escape in Time. New Media: Brooklyn: For Real. Alexandra is also a puppeteer. For more, visit alexandragellner.com 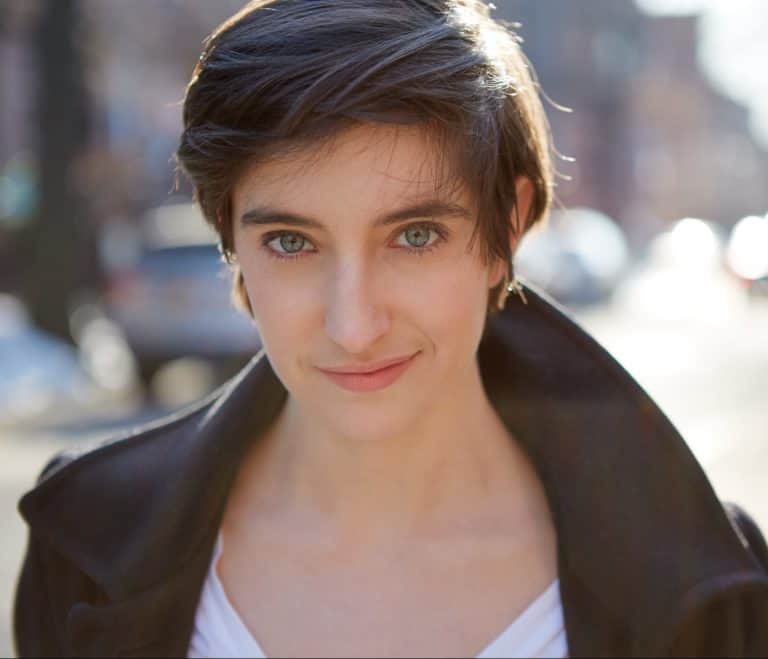 Rachel Griesinger (Anne Frank) is a Brooklyn based actor, collaborator, teaching artist with an activist streak. She recently received her MFA in Acting from The New School for Drama. She spent her formative years growing up in Sao Paulo, Brazil. She has traveled extensively throughout Central and South America for both theatre and pleasure. This summer Rachel was accepted to the Lincoln Center’s Teaching Artist Lab. She recently performed in a staged reading at Ensemble Studio Theatre. Some of her favorite roles include: Cassius (Julius Caesar), Widow (Vigils), Luciana, et al. (Comedy of Errors). As well as performing, Rachel is also a dialect and accent coach for actors. She is very excited to be playing Anne Frank and feels that in our current state of geopolitical turmoil this material could not be more prescient. www.RachelGriesinger.com 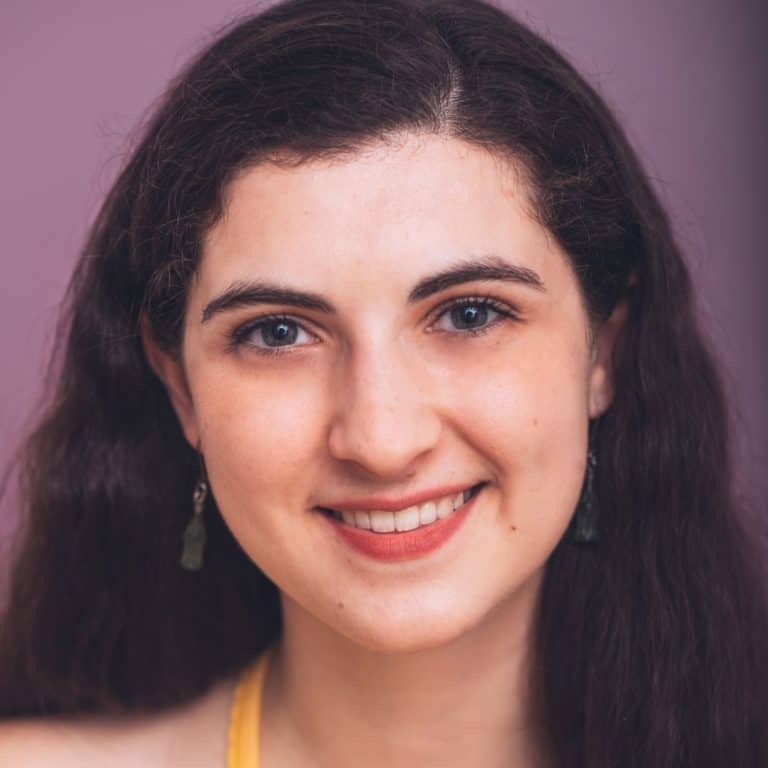 Olivia Konteatis is a Manhattan based actress and singer. She is incredibly honored to tell Anne’s story. The more she reads of Anne’s work and her incredibly creative mind, the more she falls in love. Olivia is a graduate of NYU Tisch, The New Studio on Broadway. Recent credits include: I Want A Country (NY Fringe Festival), Matt & Maddie (Midtown International Theatre Festival), Fun Home, Merrily We Roll Along, Idomeneus (NYU Tisch). Olivia is from New Jersey and is a proud first generation American! Her family’s roots are in Cyprus and Ireland. oliviakonteatis.com 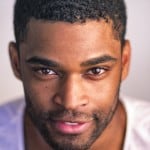 Wesli Spencer (Dr. Martin Luther King, Jr.) is a classically trained actor who studied at the prestigious Guildhall School of Music and Drama in London. A school in which 4,000 applicants apply for 25 spots a year and whose alumni include many of the UK’s top actors (Ewan McGregor, Daniel Craig, Orlando Bloom, Lilly James), this extensive training brought him to New York city to develop his acting career. His range includes stage, television, independent films, and high drama realism film. He is sharp, witty, professional, and a pleasure to be around when not “intensely” focused on his work. He recently had a film premiere at the Carmel International Film festival in Carmel, CA called “Brian Mickler” of the short film series “Harlemites.” Wesli is honored to be playing the iconic Rev. Dr. Martin Luther King Jr. with the Anne Frank Center for Mutual Respect in “Letters.” Commercial credits include: Bank of America, Stacey’s Pita Chips. Theatre credits include: “The Addicts” (Theatre for the New City), “White Dresses” (The ReGroup Theatre). Film credits: “Plurality,” “Harlemites,” “Virgil,” “Brian Mickler.” 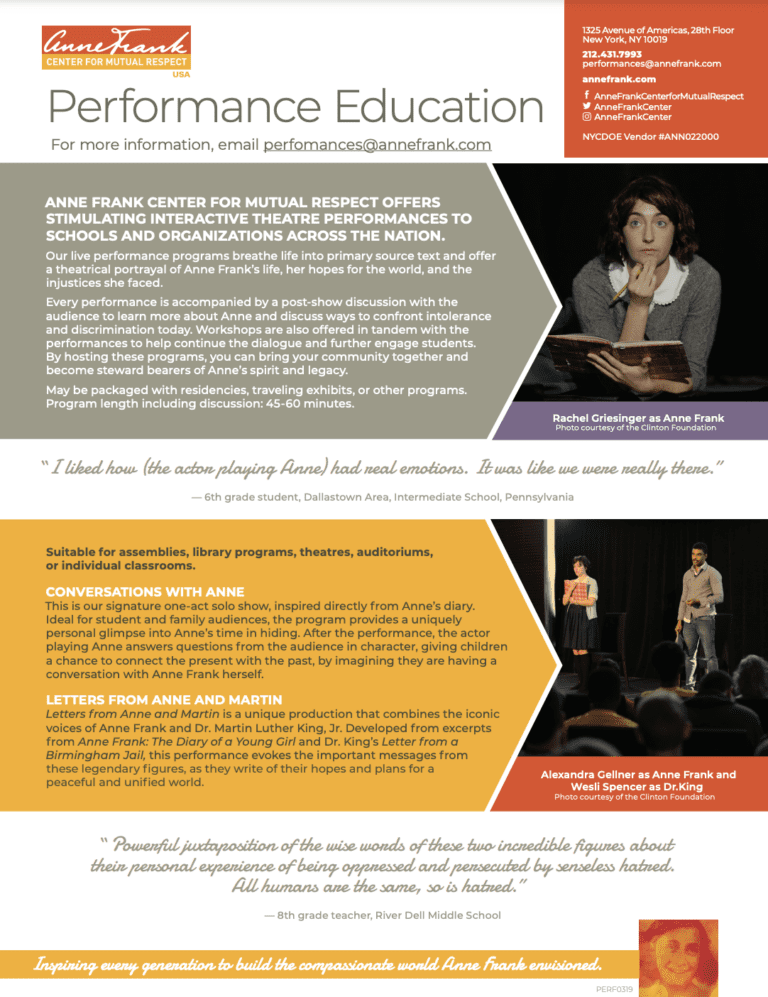 By hosting these programs, you can bring your community together and become stewards of Anne’s spirit and legacy. For more information about hosting a performance in your community, please download our performances flyer, contact us at 212.431.7993, or email performances@annefrank.com

These and other Anne Frank Center educational programs are made possible in part through funding from:

The Anne Frank Center USA is a 501(c)(3) not-for-profit organization. Please support us to help us continue our mission. Contributions to the organization are tax deductible to the extent permitted by law.

© 2023 Anne Frank Center USA. All rights reserved. All quotations from Anne Frank and photos of the Frank family are used by permission and copyright ANNE FRANK FONDS Basel, Switzerland.